Finally! Vacation day has arrived! I have been too busy getting over with work and planning this getaway with the lady and I.

We are heading up to Traverse City, Michigan. If you don’t know where its at I believe it was voted one of the best cities in America to visit. Just Google the city and you will see why. I mean, we are going in the winter time so not a lot of play-in-the-sand stuff today but you get the idea.

It’s just basically an escape from everything. For me it’s mostly work. Work, these past few days, has become almost unbearable. People getting fired, hiring idiots, and disciplining people who don’t deserve it. The management in my department is the most biased group of people I have ever come to the displeasure of meeting and knowing. I mean… I guess examples really set the picture.

So to set the image, here’s a picture that really explains my management team in a nutshell: 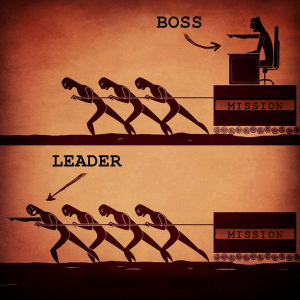 We have bosses. Leaders? That’s an interesting word. See my department likes to run things from behind a desk. If they choose to leave their desk, its to only head hunt and try to get people in trouble. I would imagine its because no one bothers to come into their office to talk to them and they sit there scratching their heads why everyone practically hates them but fakes the fact that they are great people in fear of losing their jobs. Of course when I say this I am labeled as “immature” or “unable to handle the task” or the best part of all “too blind to see the big picture”.

There was a time where our sergeants were our leaders. They congratulated people for a good hard days work and knew who the bad eggs were. They knew that it was their job, not ours, to approach us and get to know us. They were never too busy to find at least five minutes in their day to come up to us and talk to us. I loved working with the sergeants… But not so much these days.

Now our bosses expect us to approach them. Now it is our job to explain to them how good of a job we are doing because they’re too lazy or too good to recognize our jobs. It’s like writing yourself a recommendation and having them sign off on it without even reading the content of the letter. If you ask me its down right stupid (but again I’m too immature to be a leader).

There was a talk of unionizing our department. There were too many problems with that though… The union was known for embezzlement, they were shady, and they have never represented a department like ours. At that time our bosses were great at being our friends. They didn’t want to lose control.

Would they know the difference between a boss and a leader? Not a chance. Here’s a good example of why no one likes to work under my management.

We have an officer who is constantly a screw up. Lost his collapsible baton one time, lost a set of keys to the cruiser, and was involved in an incident where he was the reason why two officers were seen in the Emergency Department. Basically this guy is a quack. BUT! Because HE sucks up to the bosses and does whatever they want him to do he is considered a “good” officer. No one likes to work with him… No one…

And our bosses sit there and scratch their heads wondering “why is morale so low?”… Idiots…

To end this rant before I escape for a few days to salvation I leave you with this image. This is really for all of the fans of video gaming.

If you know where that’s from then you will get the reference. I think they based their department off of ours. Especially with that bold statement.

So have any of you experienced this? Although I’m talking from law enforcement side I’m almost certain we have all known the difference between working under a boss and working with a leader.

It’s 8:45 in the morning and after this rant I feel like I already need a beer to calm down… Ugh I can’t wait to leave. Just make sure if any of you know who I work for tell them I love my job and that they’re doing great. Last time I told them something else I basically got stripped naked and got set as an example of what happens when you defile our “leadership”. They toss that word around and don’t even know what it means… Pathetic…

But I’ll be gone till the weekend.