That is what I am. A weekend warrior, part time Marine, a tampon. I’ve heard all the names.

I drill on the weekends, learn to shoot at targets all day, and sometimes attend a parade or two. I am in the infantry but never deployed (and never will be).

I was pretty proud to be a grunt. I did what almost everybody thought I couldn’t.

But after four years of drilling and training I found that it was all useless. Our unit has had so many deployments canceled on us that its unreal. There is almost no reason to be part of America’s finest fighting force. I feel like we’re the sports car that is never out of the garage all year round, but yet we still do maintenance to it. 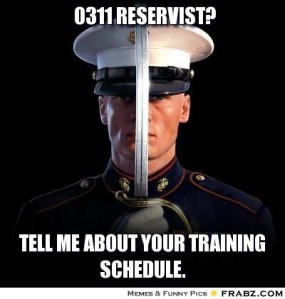 This weekend is another drill out in the field. It maybe be my last one.

I put in a transfer request to be part of the Air National Guard for their fire protection job. I wanted to do a job that can help me out in the civilian world.

As the years went by I realized that I needed a career field to go in to. My current job is great, but there is always room for something more. I talked to a friend of mine who is a fire fighter for his Air National Guard unit. He told me about all the training he’s done and that the certifications can carry over into the civilian world.

So I got all excited, set up a recruiter meeting, and got the papers for my transfer.

I found myself sitting in the admin office at my reserve unit. Everyone wondered why I wanted to transfer out. They all knew I was a pretty good Marine. Everyone at my unit knew me (its not hard when you’re one of two Asians in the whole company).

I told them that it’s time for me to start thinking about a career outside of the military and I felt that the Air Force could help me with that. They respected my thinking about it and wished me luck. So off the paper work went.

I told all of my friends in my unit. Of course they didn’t like it. All of the good guys in the unit were getting out because their contract was coming to a close. I was one of the few senior people in the unit and with me leaving people felt like I was stabbing them in the back. I was bumped down in my position as a potential team leader because my senior leadership didn’t want to waste their time on someone who was getting out soon. So be it.

I will miss all the times when we were freezing to death out on the range walking in circles just to feel our feet. Waking up in a tent with ice stuck on the inside frantically getting on my clothes just to get out in the wind whipping snowy air outside. Trying to light a cigarette with the desert wind blowing sand into my lighter. Getting frustrated when it rains while I’m trying to eat. Baking in the hot 110 degree weather with 80lbs of gear on us.

I’ll miss all of it because I had people there to laugh about it. We all managed to laugh about how crappy it was. That’s just how we were. We didn’t care because the other person next to us is having just of a bad time as us.

But it was time for me to move on to something bigger and better.

Now one thing that really annoys me is that as “organized” as the military and government is they lost my transfer paper work… Twice! They also accused me of being a liar about even submitting the paper work in the first place! Oh yeah…

So I put in the request back in May. Its October now…

So to make things worse I was told that the transfers only take two months tops. Well after losing the paper work a few times it was finally sent up the line to be signed off by the higher ups.

Then I got an email a few days ago that made me want to rip my hair out. The paper work apparently has a thirty day expiration date. What?! So how would it take only two months if thirty days is when it expires? Marines cant do math…

So I had to resubmit the papers for it to “finally” get signed off.

After all of this mess of a paper work trail that I was creating I got word from my friend in the Air Force Fire Station. The fire academy has a back up and I wont be going for possibly another year or two.

After all of this I probably wont even be a fire fighter in the near future. So I’ll just check into a unit and be the gear runner until I’m certified to help run the station. Four years in the Marine Corps prepared me for that job I guess.

One thing is that when I do go to my training it will be a blast. Spending three months out of state will be a bit of a challenge. Leaving my mom, my girl, and Melon. I’ll probably die a little. I died a bit when I left my girl for just a two week annual training for the Marines back in August, but this time I’ll have a phone with a charger and Skype.

But I’ll be back. Ready to tackle the civilian world with better knowledge and education to have a better life. I want to build a great life and I can’t do that being stuck in a job where all I do is shoot guns.

It’s fun and all but once my contract is up where do I go from there? I already proved that I could do it so I got nothing else to prove.

I’m just hoping that my future will be better and brighter from here on out.